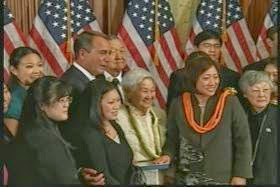 Boehner honored on the front page of Hanabusa's official website

As we've been warning she would, corrupt New Dem Colleen Hanabusa has already, albeit inadvertently, shown her true colors when it comes to choosing between her wealthy business donors and ordinary working families. With the President and the Senate Democrats-- or at least all but the handful from the Republican wing of the Democratic Party-- working hard to raise the minimum wage to $10.10 per hour, a very popular position across party and regional lines, Maine Republican Susan Collins is trying to hold down the increase as much as she can. And Hanabusa, true to form, is on her side. This morning I asked the progressive Democrat running against Collins in Maine, Shenna Bellows, why Collins was so adamantly against raising the minimum wage in a state like Maine, where the vast majority of people support it.

"I know what it's like to grow up in poverty, working to break into the middle class. In the minimum wage debate, the guiding principle should be that mothers and fathers who work 2 or 3 jobs should not be living in poverty. The guiding principle should not be: What will out-of-touch Republican politicians, many of whom are millionaires, agree to in order to keep their corporate funders happy.

"Instead of fighting to give American workers a $10.10 living wage, Susan Collins is joining corporate interests and national Republicans to water down the bare minimum that workers need to stay out of poverty. She is fighting to reduce wages for thousands of Mainers and millions of Americans. If I were in the Senate, I'd be leading the fight to rally the public and get out-of-touch Republican politicians to do the will of the people on this issue."

Alas, it isn't only corporate interests and national Republicans stabbing working families in the back. There is also New Dem Colleen Hanabusa, Hawaii's conservative corporate shill. Tuesday we speculated that that is why, at least in part, Obama endorsed Brian Schatz and why Harry Reid did likewise. Neither is pleased that Hanabusa is undercutting their work by advocating a $9.25 minimum wage, very similar to the number Collins is trying to get.

One House staffer familiar with Hanabusa's shenanigans told us that he wouldn't expect anything different from Hanabusa. "She joined the New Dems, not the Progressive Caucus like Mazie [Hirono] did. They're the easily bought-off, business-friendly wing of the party… If the restaurant owners in Hawaii are letting her husband stick his hands into the tip jars, you bet Hanabusa would sell out the workers. And if she's doing this in the middle of an election campaign, just imagine what she'd be like if she ever gets into the Senate!"

Although there were undoubtably several reasons Obama endorsed Schatz, I was told by a friend on the Hill that one of the critical factors involved comparative voting records and comparative support for the Administration. Aside from Hanabusa weighing in against the $10.10 minimum wage-- or at least being willing to "compromise" and carry water for the restaurant owners, below are some of the specific issues where her record compared poorly to Schatz's. A huge factor was Schatz's decision to stand with the the president on making peace with Iran-- especially while Hanabusa was taking the more truculent, hawkish stance favored by her major Military Industrial Complex campaign donors. She signed the infamous letter to Reid and McConnell demanding gratuitously tighter sanctions that would have blown up the president's peace initiatives.

Another big one for the Administration was Schatz's support for Obama's budget in December after the government shutdown. The White House noticed that Hanabusa voted with the Republicans. In fact, in July-- even after the Administration asked her for help with this-- she voted for her pal Buck McKeon's Defense Appropriations Act which included a pay freeze for federal civilian workers and would have forced what the White House told her would be “draconian cuts” to other domestic priorities. And that's the way she's been rolling. A month earlier she voted for H.R. 1960, a version of the 2014 National Defense Authorization Act. The Administration made sure she was aware of the president's serious concerns with the legislation, including prohibitions on the transfer of detainees at Guantanamo, funding in the Overseas Contingency Operations budget and funding for the war in Afghanistan, missile defense provisions that included a proposed third missile defense site on the East Coast and restrictions to implementing the New START treaty with Russia. And, again, they noted that, "H.R. 1960 assumes adoption of the House Budget Resolution framework, which would hurt our economy and require draconian cuts to middle-class priorities." None of that stopped Hanabusa, who gets immense sums of money from military contractors and arms manufacturers, over $158,000 since 2010.

She's voted with for Republican efforts to undermine the Affordable Care Act (H.R. 3811) and, again serving the interests of her wealthy donors, she voted to loosen consumer protections in the Dodd-Frank legislation. In June,2013, Republicans wanted to allow foreign entities of U.S.-owned banks to avoid regulations on their overseas derivatives trading; many of the corrupt New Dems made common cause with the Republicans on behalf of their Wall Street pals and Hanabusa stuck with that crowd against the Democratic caucus-- and against what President Obama was asking for in terms of protecting the public interest. Maybe people have speculated that when EMILY's List guaranteed Hanabusa they could get Elizabeth Warren to back her, the neglected to consider that Warren wasn't happy that Hanabusa voted to undermine the Commodity Futures Trading Commission’s ability to oversee offshore derivatives transactions-- transactions that can threaten the strength of the U.S. financial industry and economy. Warren ignored EMILY's List's pleas and not only refused to back Hanabusa, but endorsed Schatz in a big way.

And the timing of the President's endorsement is important to understand. If Obama just intended to endorse Senator Schatz simply as political payback for the '08 campaign, which is what EMILY's List and Hanabusa are telling everyone who still takes their calls, then he could have done it a year ago. Instead, he wanted to see how Schatz actually performed in the Senate, and the Administration carefully watched his performance and his record before making the decision. The President and the Democratic leadership have been crystal clear that Schatz is doing a good job, and that they want him back in the Senate. Hanabusa would be, whenever someone dangled something shiny under her nose, another vote against middle class priorities. We have enough of that already. 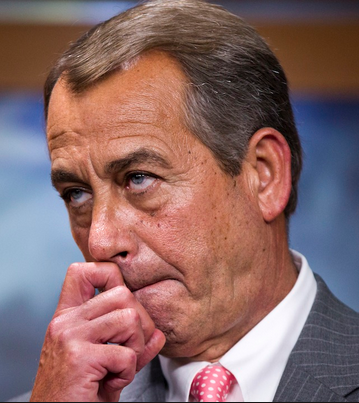 Do her loyalties lie with this man or with the President?