Apparently by her own admission, this is one of Colleen Hanabusa's stand-out accomplishments since being elected to Congress in 2010.

The website for her Senate campaign doesn’t list any legislation she’s passed or projects she’s supported, at least as of June 29, 2013. Indeed, it only asks for money and endorsements:

Asked to recall a notable moment after her first year in Congress, “she said she was proud of a vote she made that teamed her up with Republicans and upset environmentalists”.

Many residents of Maui are extremely upset about her vote which was intended to allow Hawaiian Cane and Sugar (HC&S) to continue burning dirty coal on Maui without stricter pollution control.  The emissions (which are not even stack monitored because supposedly this coal-fired plant is "cogen" with sugarcane bagass) affect the health of the poorest of local kids in Kahului and Wailuku on Maui.

By the way - all of you using "Sugar in the Raw" - that sugar is produced by HC&S burning their fields, choking the residents of Maui with smoke and damaging their health.  The EPA estimates that "Tens of thousands of premature deaths are caused by soot".  Thousands have petitioned the Sugar in the Raw company to demand HC&S harvest via no-burn but the company (based in New Jersey) refused.

Not only that, one of the three HC&S plants is grandfathered in and uses 1952 pollution control technology.  Until recently, the EPA was unaware that HC&S was burning nothing but dirty coal for 3 months of the year and did not require adequate pollution control on their plants.  We'll see if that changes, now that the EPA has been made aware of HC&S little deception.

Worse yet, for 9 months out of the year, HC&S (a division of the "Big Five" missionary-created, Alexander & Baldwin) burns sugarcane before harvesting - smothering the towns of Pa'ia, Kihei, Kahului, Wailuku and Waikapu with choking soot and causing lung damage.

On the mainland, they burn crops.  These burns last only about 2 weeks are in the middle of nowhere.  But Maui is a small island only 727 sq miles (26x48 miles) and homes back up directly to the burning cane fields.  Residents flee their homes when the fires are lit, but that doesn't stop HC&S from smoking out schools and giving Maui one of the highest rates of child asthma in the nation.

But back to Hanabusa's favor for HC&S and the exploitive Alexander & Baldwin Company.

Hanabusa joined just 40 other mostly conservative Democrats (including her New Democrat Coalition colleagues) and all Republicans in voting for the bill.

She claimed the EPA’s rule could cost 800 jobs on Maui:

But what is the truth?  Most of these jobs are foreign farmworkers imported by HC&S and housed 20 to each shabby, rundown home in Haliimaile.

The bill advanced to the Senate, where it was defeated. 55 of 56 Senate Democrats voted against the bill – i.e., for the EPA’s clean-air rule – including Hawai`i Sens. Daniel Akaka and Daniel Inouye. West Virginia Sen. Joe Manchin was the only Democrat to vote against the EPA.

Sen. Barbara Boxer praised the Senate for killing the bill and criticized the House for passing it, saying “the pollution the bill would have allowed to blow downwind would have been the equivalent of ‘allowing people to dump toxic trash on their neighbors' doors’”.

A unified effort to support environmental protection has usually been a hallmark of Hawaii’s Congressional delegation since statehood. Indeed, Sen. Inouye consistently voted against Big Coal and in support of the EPA on clean air.

Why Hanabusa's vote angering environmentalists - and bucking Hawaii's traditions - made her so proud is unclear. Because the bill failed, EPA’s Cross- State Air Protection Rule went into effect.

Two year later, the Maui jobs Hanabusa said would be lost are still in existence.

In fact, the HC&S coal-fired plant in Pu'unene, Maui is supplying about 9% of Maui's electricity, which accounts for the $21,000,000 profit that that division of Alexander & Baldwin earned in 2011. 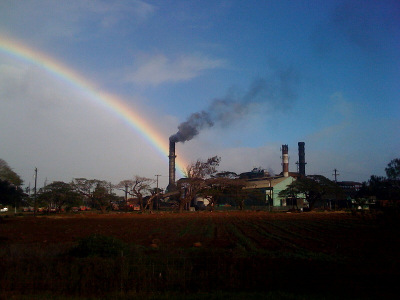