Colleen Hanabusa joined the GOP in voting for the unnecessary “Health Exchange Security and Transparency Act” called a “messaging” vote meant to discourage people from signing up for insurance by Democratic leaders.

This one sentence act is a sophisticated and effective laughable response to ACA website security.

According to the NY TImes:

On Thursday, the ranking Democrats on the House Committee on Oversight and Government Reform — Representatives Elijah E. Cummings of Maryland and Henry A. Waxman of California — released a memo pointing out that there have been “no successful security attacks to date” on HealthCare.gov and that the agency already has protocols in place for notifying affected users about any security breaches.

Hey - I have no problem with making sure people get notification of security breaches.  But perhaps the House GOP might have first checked out the existing protections required of all Federal citizen data which have been protecting our IRS, passport, Social Security, and Medicare data for decades.

In fact, President Obama has been trying to get Congress to pass national data breach legislation for the last two and a half years - not this ill-thought out, politically inspired and hastily written bad legislation targeted only to the health care exchanges and not to the IRS, private corporations, the state departments of motor vehicles, the state department passport division and the myriad of other agencies who deal in sensitive personal information.

So why is the GOP worried only about ACA information?

According to Speaker Bohner:

the bill was “part of a broader effort to protect the American people from the consequences of this disastrous law.”

And according to the President, this law just loads the Health Administration down with more paperwork

The Federal Government has already put in place an effective and efficient system for securing personally-identifiable information in the Health Insurance Marketplaces and providing consumers notification if their personally-identifiable information has been compromised. When consumers fill out their online Marketplace applications, they can trust that the information that they are providing is protected by stringent security standards.

The Administration opposes House passage of H.R.3811 because it would create unrealistic and costly paperwork requirements that do not improve the safety or security of personally-identifiable information in the Health Insurance Marketplaces.  For example, the indiscriminate reporting requirement in H.R. 3811 may seriously impede the law enforcement investigation of a breach.Unlike existing requirements, H.R. 3811 requires expensive and unnecessary notification for the compromise of publicly-available information, even if there is no reasonable risk that information could be used to cause harm. [emph added]

Considering the stringent Federal standards that are already in place to protect private information, one has to assume that this bill is a purely political move.  The democrats like Rep. Colleen Hanabusa who aided and abetted the GOP in more of their ObamaCare bashing are mostly doing it because they're in red states where they think they need to distance themselves from the ACA.

But Hanabusa has been trying to convince her voters that she's more liberal than the very progressive senator she's attempting to unseat.  Oops!  I guess she picked up the wrong playbook and went back to her more comfortable GOP inclinations.

According to the White House:

H.R. 3811 ... is less effective than existing industry standards and those already in place for Federal Agencies that possess such information

“In the first week of the new session, it is very disappointing that House Republicans have continued to waste time on legislation to undermine the Affordable Care Act.

Democrats have long supported strong data security and breach notification, but the legislation considered today does nothing to improve the safety and security of the data collected by federal and state marketplaces.

In fact, it could do just the opposite, potentially impeding law enforcement's ability to investigate security breaches.

To date, there has been no successful security attack on healthcare.gov, making this bill nothing more than a scare tactic to dissuade Americans from accessing the quality, affordable insurance options provided through our new marketplaces, where 6 million Americans have already logged on and successfully enrolled in a private plan or in Medicaid coverage. [emph added]

So thanks a million, Rep Hanabusa, for helping the GOP undermine ObamaCare so that you can reap a little political hay. 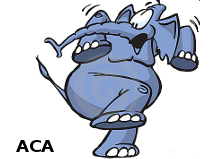